Do you feel bloated some of the time, or even worse, all of the time? If you have a ‘food baby’ after your meals, then you want to read this. One of the more common reasons why a person bloats after eating is due to an issue called SIBO. SIBO stands for ‘small intestine bacterial overgrowth’. For the most part, the bacteria aren’t usually pathogenic – just too many in the wrong place. Once they get where they shouldn’t then we start to have symptoms. Unfortunately, a person is usually wrongfully diagnosed with IBS, and with about 15% of Americans complaining of IBS, that is a lot of people that are not getting relief. Beano, Miralax and Immodium AD will never address bacterial levels, or what allowed SIBO to happen in first place.

As you have probably guessed, one of the most common complaints is bloating, and it is usually after eating carbohydrates or a high fiber meal. The reason this happens is bacteria metabolize the carbs and fiber and produce two types of gas. The first type of gas is called methane. This is actually a defense mechanism of the bacteria to also decrease bowel motility, leading to bloated and constipation. This happens because the methane gas shuts off synthesis of a chemical called serotonin. Contrary to popular belief, the vast majority of serotonin is made and used in the gut. However, with an inflammatory condition like SIBO, the body doesn’t produce serotonin, instead, it makes other chemicals called kynurenic and quinolinic acid. When this starts to happen, now a person is bloated, constipated, depressed with brain fog, and might even have trouble sleeping.

The other type of gas is a hydrogen gas. These are sometimes made by a type of bacteria called sulfur reducing bacteria (these patients pass gas that has an eggy odor to them, also their skin changes color when exposed to cheap jewelry). When the bacteria make hydrogen, there is also typically a lot of toxins made as well, called lipopolysaccharides (LPS). From the point of view from your body, it is easier to eliminate a toxin than to absorb it and then have to deal with it. For this reason, the LPS is combated by histamine made in the bowel lumen. This increases bowel motility and causes diarrhea. This is very good for the body, believe it or not, as LPS are a substance that promotes a leaky gut, autoimmunity, and brain degeneration (think Alzheimer’s). This person will complain of bloating, diarrhea, weight loss, and malnutrition – even if they are supplementing.

Fatigue is present with a lot of the people that also have the above complaints. Regardless of constipation or diarrhea, there is typically malabsorption present. With some, the stomach doesn’t get acidic enough, and the bacteria compete for the protein and amino acids. Multiple processes in the body require these amino acids, but some very important processes are making neurotransmitters, building cell walls, and liver detoxification. Also, the ability to make glutathione (the bodies major antioxidant) requires adequate amino acids, vitamins, and minerals. When the stomach gets acidic enough, then the food is properly digested, the food is sterilized, and signals are sent to the brain to tell the other digestive organs to start doing their job because the food is coming.

Another mechanism of malabsorption is that bile secreted by the gallbladder is made into a substance called lithocholic acid. This causes oxidative stress (rust) to the GI cells, immune cells, and to the nerves in the gut called the enteric nervous system (ENS). As this bile is degraded, this leads to poor fat digestion and absorption. Proper fat absorption is necessary for sex hormone production, cell walls, and especially neurons. Also, the fat soluble vitamins don’t get absorbed as well.

Poor absorption can also stem from damage to the actual GI cells. The GI tract is like a shag carpet rolled in on itself. The shags have a name called villi. These villi account for the vast surface area of the intestines, as well as absorption. When these get damaged, a person can have problems absorbing iron, B12, amino acids, and minerals. These villi also produce enzymes called ‘brush-border enzymes’ that break down sugars such as lactose, maltose, and sucrose (this leads to symptoms when a person consumes dairy or fruit). All the brush-border enzymes are important, but there is also one called diamine oxidase (DAO). This DAO is supposed to break down histamine in food, as well as histamine released by the body to combat the LPS. If this histamine doesn’t get broken down, then this leads to a bigger inflammatory response resulting in even worse absorption.

The fatigue can also come from anemia, either iron or B12 type anemia. A person can even be low in these if they are taking a supplement due to poor absorption.

Although several people can have the same symptom, it can be caused by a different problem. A common cause of SIBO is a reduction in stomach acid. There can be several reasons the stomach isn’t making any, and they can include:

The primary focus should be on why the stomach doesn’t work. The reason the stomach must get acidic is so signals can be sent to the brain to help regulate hunger, satiety, and metabolism. Typically a person is diagnosed with GERD and given a medication that actually worsens the problem. Usually, a person will complain of bad breath, acid reflux, distaste for meat, belching, and a ‘heavy’ feeling in their stomach.

Another issue that can lead to bloating and a SIBO is poor motility and valve control. This is termed the brain-gut axis. In a nutshell, signals from the ENS relay info to the brain, and the brain responds accordingly. This two-way street is always in motion. Speaking of motion, the brain uses a nerve called the vagal nerve to stimulate bowel motility through something called the motor migratory complex (MMC). Inflammation in the GI tract can degrade the ENS, which causes poor communication. There are triggers such as strokes, MS, or TBI that can degrade this system relatively quickly, but the most common cause of poor motility is an overactive stress response.

By design, the stress response shuts off digestion. Another thing that can impede motility can simply be a person holding it while at work or out because they don’t like to use a public restroom. Between the large and small intestine, there is a valve, kind of like a trap door. Holding in a movement can keep this valve open, and allow bacteria to migrate from the large intestine to the small intestine. Unfortunately, this can become a vicious cycle. The brain can have trouble controlling the gut, which leads to a lack of nutrients, which leads to even further brain degradation, and as bacteria increase they can decrease motility even more if they make methane.

The immune system and SIBO

There can be an impairment of the immune system as well that can lead to these symptoms. This could be from a long-standing infection such as Lyme or Candida. If a person has Crohn’s or Ulcerative Colitis or another autoimmune disease, then that could be a problem as well due to the immune suppressing drugs. Ultimately, as the mucosal layer of the GI tract fails and loses its barrier function, the immune system can’t keep the bacteria in check.

On the low end of the totem pole, anatomical issues can lead to bloating. The most common of these are surgeries such as gastric bypass, the removal of intestines valves, or scar tissue.

There are different methods available to test to see if SIBO is causing your bloating. Some people will get a scope and the doctor will do a culture. This is pretty expensive and invasive, plus 99% of the bacteria in the gut die when exposed to oxygen, so they don’t grow too well in a culture.

A more common test is a breath test. In this scenario, a person will ingest a drink that the bacteria can metabolize and then the test will look for hydrogen and methane. Not all bacteria in the gut produce methane and/or hydrogen, and sometimes motility (too fast or too slow) can give a false positive or a false negative.

There is also a blood test that looks for antibodies. As the gut barrier breaks down, the immune system will create an increased rate of antibodies to LPS. In some people, the immune system can’t make sufficient antibodies, or a SIBO can be present with the barrier still intact (meaning it isn’t leaking yet) and can also give a false negative.

A good option for a person with bloating is to do a functional stool test. Although the test won’t directly ‘see’ a SIBO, the test can help evaluate the environment that allowed it to grow, as well as see how the bacteria are influencing the environment. A good stool test can look at the immune function, digestive enzyme production from multiple organs, as well as bacterial activity in the GI tract.

Lastly, a person can go off of symptoms. If a person bloats after ingesting carbohydrates like pasta and bread, then odds are they have a SIBO. 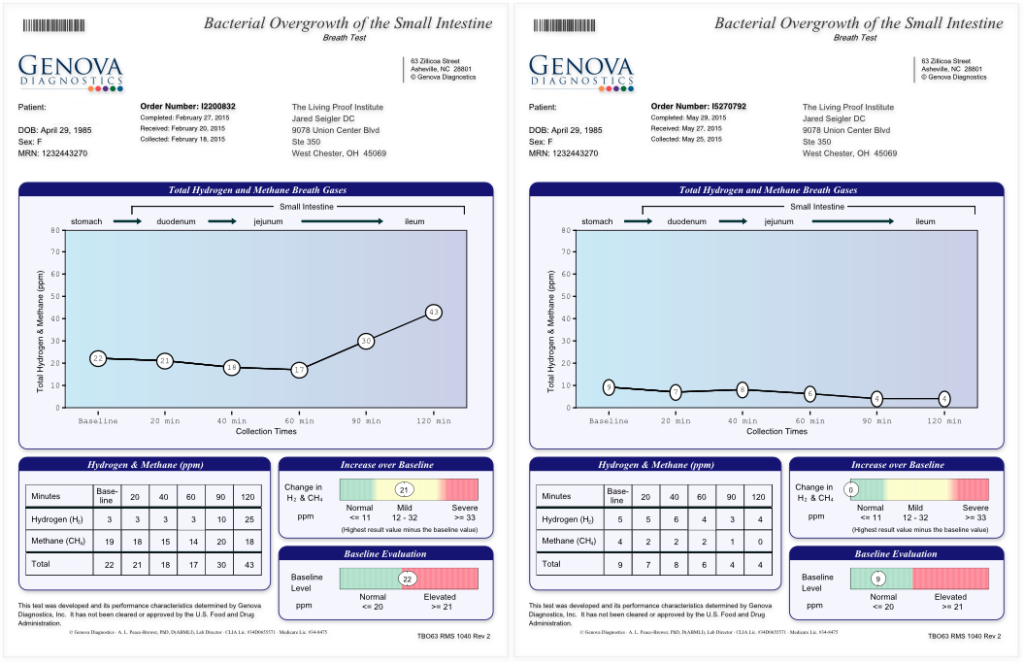 The current treatment for a SIBO is an antibiotic called Rifaximin. Some other antibiotics used are metronidazole and neomycin. People usually have to go on multiple rounds, and this can lead to a barren gut. As all bacterial populations diminish, the mucosal layer starts to lose its integrity. Think of it like a field with no grass in the rain, the dirt starts to wash away. Sometimes a person will also be prescribed a pro-kinetic drug to help with motility. These usually consists of drugs that stop the re-uptake of neurotransmitters not being made or utilized correctly such as serotonin. Unfortunately, the reoccurrence rate of this route is over 90%, as the underlying issues mentioned above are not addressed.

As far as eating for a SIBO, there is a lot of variation from different sources. Ideally, a diet should be customized for an individual based on food sensitivities, co-infections, and digestive chemistry. To get started on a diet, a general rule of thumb is no:

When working on ridding yourself of bloating and SIBO, we recommend working with a functional medicine doctor that can help you get to the root cause of your complaints.  To find out if we can help you feel your best, call our office. We are happy to answer your questions and help you make an informed decision about your health if we can’t help you, we are happy to point you in the right direction.